Here is a quick update on les moutons. Three more fat sheep have been added in this row...there will be ten sheep total across the bottom. The groups of eight and nine are already completed. When they are complete I'll start the five going up the left side. 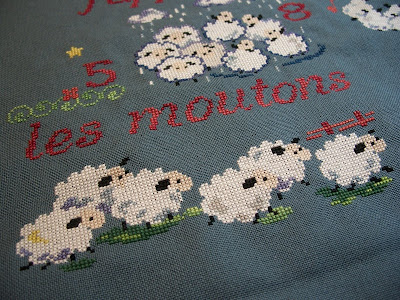 Questions, questions...Chiloe asked if this was being stitched for me or as a gift? I would say this is for me. I liked the design so I decided to stitch it, no plans otherwise! Cathey wanted to know what is the fabric color? This is 32 count "Blue Spruce" but I've no idea what brand.
Tomorrow is April. Do you know what that means??? YES! It's CRABBY TIME! Woo Hoo! The sheepies will be put away for a time now. I'm also suffering the dreadful New Start Itch. Like I need another project.
Thank you for visiting my blog today.
xox
Meowed by Daffycat at 3/31/2009 08:29:00 PM 41 amicable purrs (click to leave a comment)

Oklahoma was under a blizzard warning starting Friday. In Stillwater, we were supposed to get up to a foot of snow Friday afternoon into Saturday afternoon. I was excited to think we were finally going to get snow but mad it waited until nearly April to get here. Especially considering Saturday was our Tulsa Talons' opening Arena football game and if the roads were bad we could miss the game! I shouldn't have worried. The snow didn't even start until late Saturday morning and we only got a couple of inches, not even enough to cover the weeds in the grass. (Yes, our lawn wants mowing!) To be fair, some areas in Oklahoma did get a couple of feet of snow! The drive to Tulsa was not too bad, although Tulsa had a lot more snow and the closer we got the worse the roads were with cars in ditches all over. We had dinner at McNellie's Public House and so what if they have beers from all over the world, I still had my Bud Lite with salt & lime. Boring, eh?
The Talons' opening game was against the Kentucky Horsemen. This year, we have a new arena at the new BOK center. I liked the new venue but I do miss our old smaller arena, the fans could make that one thunder with noise and we were famous for doing so! We won the game, but it was close! The team looks great with a few new faces and we are geared up for a great season.
All the excitement with snow and the first arena game and we forgot to check the mail yesterday! Rick finally went down to the box about noon and look what I missed! A short time ago, Lei of And Sew It Goes... had a giveaway and I entered & won! So, I knew this stitched piece was coming but had no idea Lei would make me such a beautiful happiness ornament! Isn't this the most darling design? And it's my favorite color, green, and I love ladybugs! I do have plans for the stitched piece, I'll share the results when I get it finished. 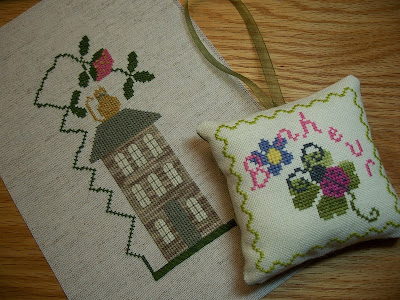 Thank you Lei, these are beautifully stitched!
Thank you for visiting my blog today!
xox
Meowed by Daffycat at 3/29/2009 12:17:00 PM 23 amicable purrs (click to leave a comment)

I want to thank those that have noticed my lack of posting and commenting and emailed asking if I am OK. Your concern has greatly cheered me! I caught the dreaded Spring Cold and it really knocked me on my tush! I actually missed two days from work, something I rarely do. I feel a little better today, thanks! Between sleeping and zoning out on the couch at the TV, I have kept up on my reader with your wonderful posts but I haven't felt like commenting very much. Rest assured, when I'm better I'll be back at it!
When I'm ill, I rarely feel like stitching so not a lot has been accomplished! I did pull out Les Moutons (or more properly: J'apprends a compter les moutons) and gave them a turn at the needle. I realize it has been a long while since they have seen any stitching so click here to see where I left off last time...Good night, it was June 2008! 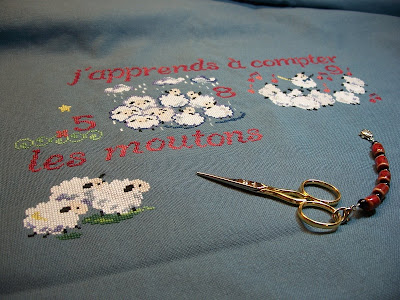 Here is a little close-up. Baa! 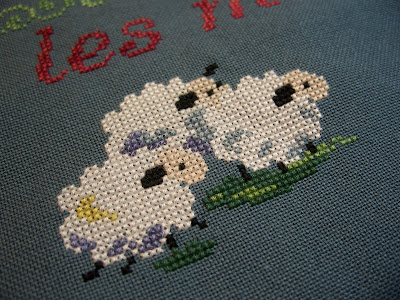 I really should work some substantial progress on these little guys before I put them away. They are too cute to ignore! This darling kit can be found at Mouton Rouge a French company. They have some super-darling charts!
~~~
~~~~~
~~~
Thank you for visiting my blog today!
xox

A Note for Michelle...

Does anybody else have trouble visiting SunnySideUp aka Stitch Me In St. Louis? Sorry, if that link doesn't work...there is a link in my blogroll to the left.
I cannot visit your blog any more Michelle!

Every time I try, it freezes my Internet Explorer. I have the blog in my reader so I am able to read the posts but I can't visit the actual blog to leave comments. This only started a short while ago and I am pretty sure it has something to do with one of the applications running in the sidebar. I have never had any trouble visiting any other blog...ever!
What is different with Michelle's blog?

It's the middle of The Week From Hell at work. Things aren't going to get better very fast. I come home exhausted from the stress of what is going on and all I want to do is sit and cry. And maybe scream obscenities at a few really stupid people. You know I don't ever say much about my work (the smart thing to do) but this week really takes the cake. I will say this...my job is not in jeopardy but it really sucks to be in management and know what is really going on.
Imagine my surprise and extreme pleasure to open my mailbox and find this RAK from Jill of Purple peacock. Jill wrote she saw I needed new scissors so... Completely gobsmacked, that's me! Jill, I can't thank you enough. Your thoughtfulness and generosity are phenomenal. I think you must be a touch psychic too, your gift could not have come at a better time. I needed cheering. ***HUGS*** 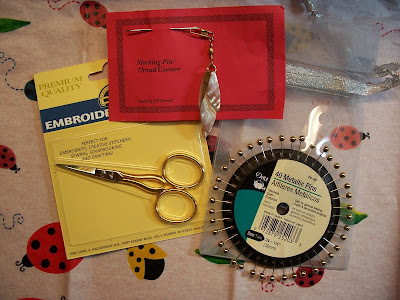 Here is Ranae's ladybug fob on my darling new scissors. They fit together just perfectly! 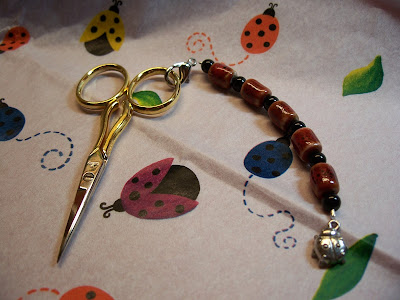 Thank you again, darling Jill.
You really made my week!
~~~~~~~~
Thank you for visiting my blog today!
xox

Jump in the Line

To quote the incomparable Harry Belafonte:

"When she wind up she bottom
She go like a rocket!"

I certainly went like a rocket once I got wound up! Here is Crabby All Year's offering for the month of March, Wind. 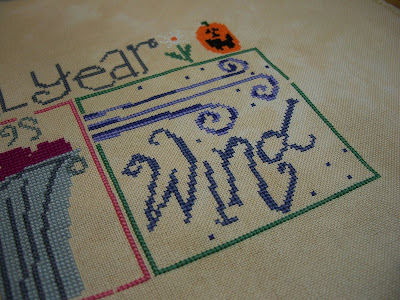 This means I am a fourth of the way through the Crabby year. I'm pretty sure most month's stitching will not be rocket fast...April's looks on par with January's with a huge block of same-color stitching. But I'll tackle that one when it gets here! 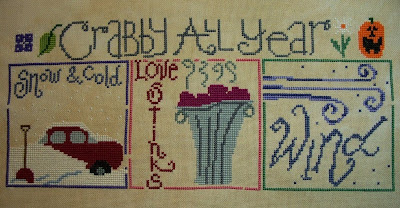 It was Ranae's 2nd Blogoversary and she held a giveaway. I wasn't the "big" winner but was lucky enough to be drawn for one of the runner-up prizes: a custom scissor fob. Look what Ranae made for me...the most beautiful ladybug fob! The pictures do not do the actual colors justice. This is so gorgeous, I need new scissors. What a predicament! LOL 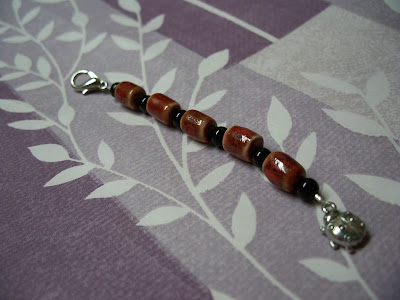 There was mail in my box today. Birthday mail! First up here is a birthday card & package from my dear friend, Joan, in London. Joan and I are long-time snail mail pen pals. Every year she sends me something from Red Nose Day. It usually shows up around my birthday. This year it is a pin badge and a charm. The charm will probably end up on my cell phone! Cute, cute, cute! Thank you, Joan! 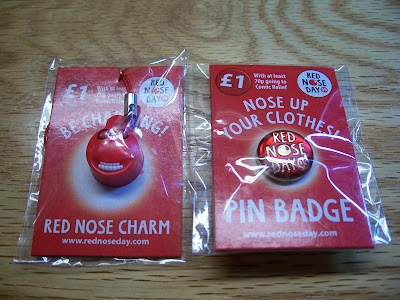 Next I opened this lovely Post Box Floss Tag from Rachael, along with birthday greetings and some ribbon and Kreinik braid. I adore the post box...Rachael knows how much I love all things British. Thank you, Rachael, for thinking of me! 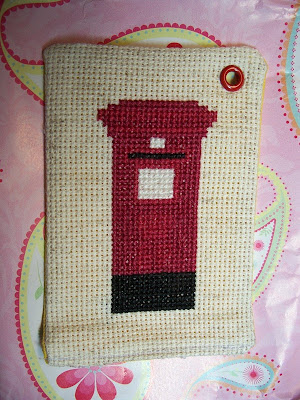 ~~~~~~~~~~~~~
Finally, some WIP pictures. While waiting for March to arrive, I stitched a teeny bit on Peacock Cypher. There isn't a great deal of progress (not a lot of stitching time) but I was able to stitch the two butterflies and row of over-one lettering at the very bottom. 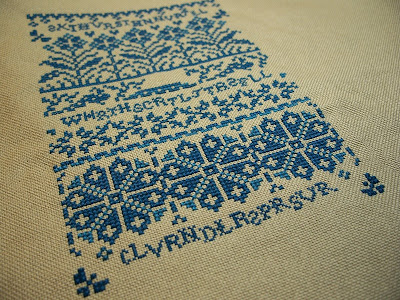 Then on Sunday, I was finally able to get out Crabby All Year and begin Wind for the month of March. Again, not a lot completed but it is a start. 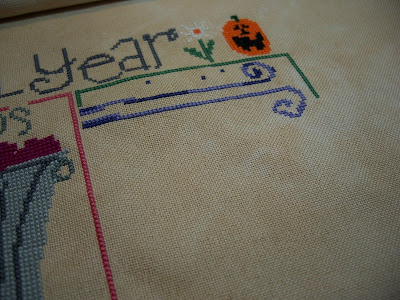 Thank you all for the wonderful happy birthday wishes on my last post, and the emails too. You are such dear friends and I cherish you.
~~~~~~~~~~~
Thank you for visiting my blog today!
xox

To celebrate my 41st birthday I had FOUR days off from work! After work on Thursday, we took a short motorcycle ride to Cushing to eat Mexican food. It had to be a short trip because a cold front was moving in and we said goodbye to the 70 degree weather. Friday, I cleaned house and went out to eat at Chili's, rented some movies and lazed about all evening. On Saturday, Jessie and I went stash shopping in Tulsa. (Rick stayed home to play with his motorcycle.) We went to The Silver Needle, Joann's, Michael's, Hobby Lobby and Barnes & Noble. Below is a bit of the stash I bought, some I have already ferreted away. Jessie and I ate at Olive Garden and we sat at the bar for an early dinner. Jessie got carded but she loved the peach fresco drink I ordered for her. I was driving so just had beer.
Sunday was spent playing with stash and stitching. I bought more David Francey albums off iTunes and was lamenting spending all my iTunes money...I opened my birthday card from Rick to find a new iTunes card inside! Woo hoo! Jessie got me some pretty variegated threads and a mouse pad for my stitching desk. I had errands today, (my actual birthday) my truck needed a thermostat, so we dropped it off and went out for breakfast. We stopped by the bookstore and I bought some Xanth novels I am missing and rented the John Adams miniseries. It's been a great birthday weekend! 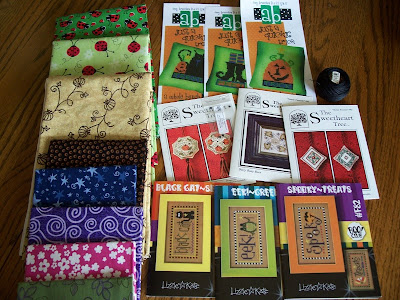 I had to buy these book rings, on clearance sale at Hobby Lobby. Actually, they are paperclips...and there are 100 of them. The package says so. Get it together, indeed. 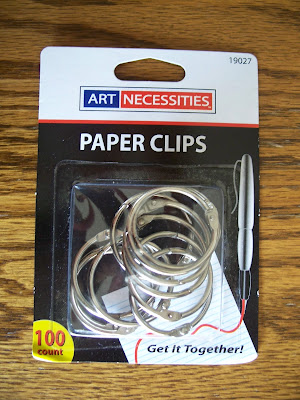