June Bugs, among other things

Sorry I haven't posted much lately. Don't you hate blog posts that begin with that? I disappear for two weeks and have the snip to say, "Oh, sorry!" Things have been just crazy around here! When the hail hit (in my last post) we were in the big middle of refinancing the mortgage, planning some home improvements...mainly, vinyl siding...and ended up needing a new roof and gutter as well. Our house has been a revolving door of insurance adjusters and contractors and trips to the bank. Getting estimates and planning costs and we've had one big headache after another! Needless to say, my stitching mojo has been high and my time and energy level, nil. Really not fair! I think, I think everything is settling out but maybe I've got my hopes stretched a bit!
June Bugs! Some people call them May Beetles. They aren't only around in May or June, but all summer long. They are horrid flyer's with zero direction control which sometimes lands them in your hair, or more often, flat on their back, "zzzzzt zzzzzt'ing" around with their wings trying to get upright again. The silly bugs have very clingy feet and they are difficult to remove from clothes or skin. These guys were the bane of Jessie's childhood; visits to Shakespeare in the Park or drive-in movies were plagued. She hated being dive-bombed by these crazy, out-of-control bugs that are insanely attracted to outdoor lights.
As a toddler, my mother once caught me eating something...which I greedily swallowed before she could steal it. In my fist was half a June Bug. Hey, protein, right?
So without further ado, here is the monthly Crabby offering, June Bugs. Whew, just in time! There is a button spider that gets stitched into the "B" but I won't add that until everything is finished. 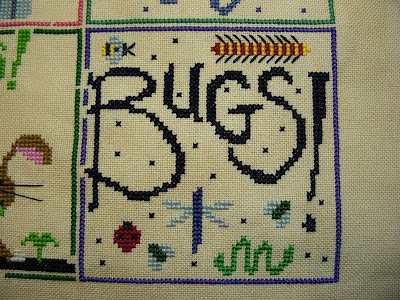 Cute, isn't it? This was fun and quick. I didn't even mind the random stitches this time. Now, with June finished, Crabby All Year is half way done! Yippee, I Love it! 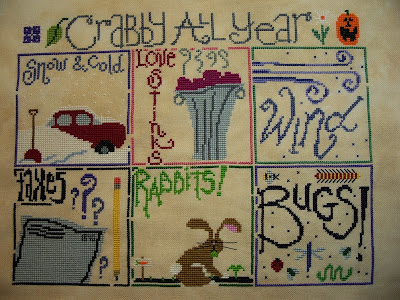 I kept putting off finishing this block, messing around with an exchange I'm stitching for. I stitched my design onto that fancy gingham fabric. It turned out alright but that fabric's weave is so loose it is uncomfortable to stitch on. Now, I can't get it to finish neatly! It buckles or twists and refuses to look neat. Not happy. I don't think this fabric is going to end up a favorite of mine. It will get one more try and if it won't tame, I'll stitch something else!
*****
Thank you for visiting my blog today!
xox

This really is a stitching blog

See, I have been stitching and I have the pictures to prove it! Here is a little scissor fob I was compelled (by that inner, screaming voice) to create for Becky. This was sent as a tiny RAK and I think Becky liked it. 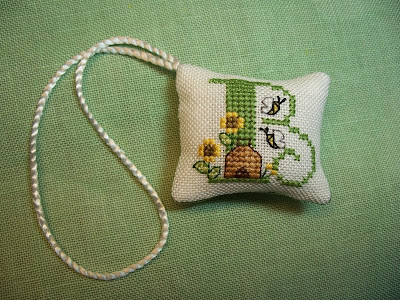 There is just a teeny bumblebee on the back. 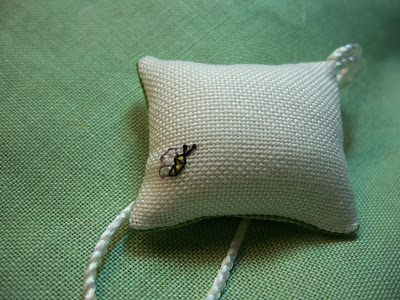 Oh, hell...I mean...hail.
Yesterday, at 9am the sky grew as dark as night and a storm swept in. We stood in the foyer at work and watched as it rained buckets, then hailed for a very long time. I don't remember a hail storm lasting so long! Below are a couple of hailstones Rick took photos of, beside his cell phone. These were half-an-hour-melted too, as it wasn't safe to be out while they were still coming down! 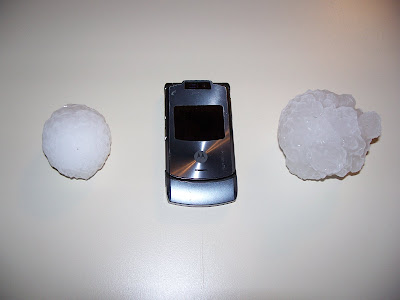 My truck got several great dents; lots on the roof and this big one on the front quarter-panel. Damn it! Jessie's car wasn't spared dents either. Rick checked the roof of the house this morning and will phone the insurance company on Monday to report the damage. 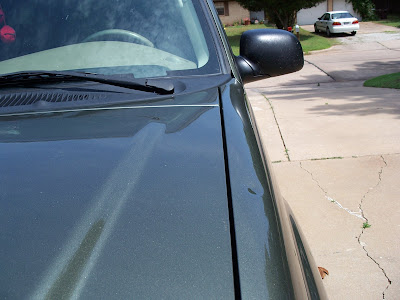 Mom & Dad House Finch have only one chick. None of the other four eggs hatched. Looks like they haven't gotten their timing of um, things down just right! But the only chick is thriving and I can always tell when Mom & Dad are bringing food as chick makes a lot of noise, right outside my stitchy window! 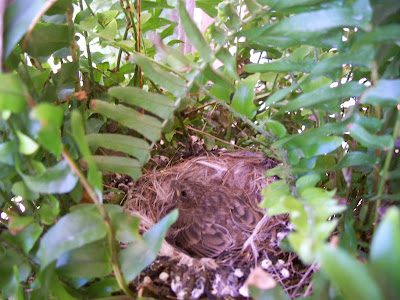 More stitchy updates soon, I promise. The mojo is still strong...it's amazing what a week off work will do for a person!
***
Thank you for visiting my blog today!
xox

I'm baaaack! Rick's family reunion in Texas was fun, lots of sand, sun and food. I had a good time even though the day before we left I caught a nasty cold. Who gets sick on vacation, anyway? The 10 hour drive to Lake Jackson was smooth...we rented the last Harry Potter book on CD and listened to it as we drove. That in itself made the drive more pleasant! We stayed in a hotel but gathered every day at this beach house in Surfside. Isn't this nice? 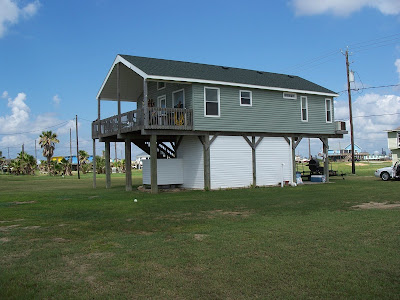 We had lots of food. Here is a glimpse of the 30 pounds of crayfish we cooked one afternoon. I've never eaten crayfish before and I must admit I still haven't. I promise, I was going to but they were still looking at me even after they were cooked! I can't eat whole fish either; something about those eyes... 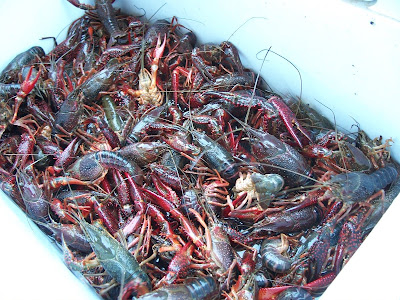 We had great weather! Very sunny and nice cool breezes. We walked the beach and gathered shells. I even went out into the water knee-deep! Really, this is a big thing for me since I hear Jaws music in swimming pools! One afternoon, I was gleefully gathering seashells at the jetty when I felt one of the shells move when I picked it up. On closer examination, I found all the shells I had collected were already occupied by hermit crabs. I put them back! 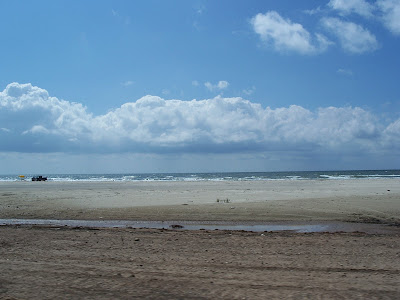 You wouldn't believe the mosquitoes down there! I thought they were bad here at home; not even close! I am covered in bites even through the repellent I wore. The bugs are so bad they have trucks that drive the neighborhoods spraying for them!
********

I am glad to be home and back to work! The cold is better except for a nagging cough. I'm afraid I shared the cold with Rick and had him snotting and coughing along with me. I had super-stitching-mojo while on holiday and got a lot done ~ I'll share that in another post!

The Prodigal Tourist is giving away a spot of tea to celebrate his birthday. Hurry on over, wish him a happy birthday and you could win it!
Thank you for visiting my blog today!
xox
Meowed by Daffycat at 6/02/2009 04:54:00 PM 2 amicable purrs (click to leave a comment)

On Saturday Rick and I were signed up to do a poker run hosted by the Stillwater Professional Firefighters. What is a poker run? Usually, it's motorcycles or hot rods and everyone leaves from a designated spot, travels to five stops (often bars or restaurants,) drawing a card at each stop. At the end, your poker hand is tallied and the winning hand wins a prize and the lowest hand wins a prize. Depending on who is hosting, there might be other prizes as well. This was my first poker run and I was quite excited!
We left the house at 8am and had breakfast at a popular diner. I don't often eat breakfast out so that was a treat. By 9:30 we met up with several friends at a local motorcycle shop and checked ourselves in. We both got t-shirts, red ones, logo shown below. I had slathered on SPF 50 sunscreen before we left the house but I was nervous so I did some more! It was probably 10 before we got everyone in our group situated and ready to go and off we went! Our first stop was a little town called Mulhall. We parked the bike and went to the bar to draw our first card. I drew a 5 of spades...crap! We had a beer; I know, beer and it wasn't even 11 am but it was already getting hot outside! More sunscreen. On to the next stop at a bar in Perry. Another beer and I drew a 9 of hearts. Yay. My hand wasn't looking favorable! Our third stop was in Pawnee and we just quick went into the bar and drew our cards...mine was a Queen, I forget what suit. And more sunscreen.
We wanted to hurry on to the fourth stop in Cushing, for lunch. The stop was at a favorite Mexican restaurant, Rodolpho's. Oh, heaven! Tecate with salt & lime, enchiladas and their to-die-for homemade flour tortillas! I drew another Queen there. Ooo, a pair! The last stop was back in Stillwater (Where the bank thermometer read 95, surely it was hotter than that?) at the famous Eskimo Joe's. We were rather early so we went inside to enjoy the air conditioning and yet another beer since they weren't drawing cards until after three. Lots of bikes were trickling in and we chatted and watched. I'm terribly sorry but I forgot the camera that day! They finally formed up to draw cards and I drew another Queen! Holy smokes!
By this time in a poker run you can usually tell about where you stand. If you only have a poor hand you can call it a day if you're tired and ready to leave. With three Queens in my hand we thought I had a pretty good chance of winning. We had tickets to the Talons/Yard Dawgz game in Oklahoma City at 7pm and we were going to cut it close! But with three Queens we couldn't just leave. 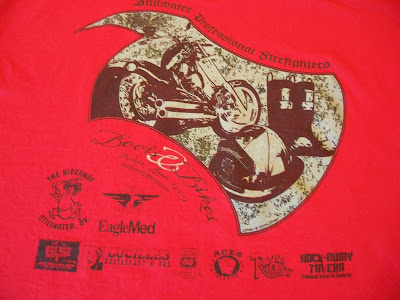 The last-bike-in deadline was 4:30 and we'd been watching them tally hands. Finally, finally it was getting close to announce the winners. Rick spoke to a former co-worker who is now a firefighter and chatted him up to go peek at the chances for us. He returned and reported I was tied for first! OMG! Last call for check-in and they started announcing winners. The winning hand was three Queens/Ace high...I was second place! We hadn't expected a runner-up prize but they called my name with three Queens/Nine high. And cows-in-the-corn, I won $200! How awesomely cool is that? One of our friends won the prize for lowest hand, $100. We also had tickets for door prizes and won a leather bag and a pirate skull cap. What a great time that was! 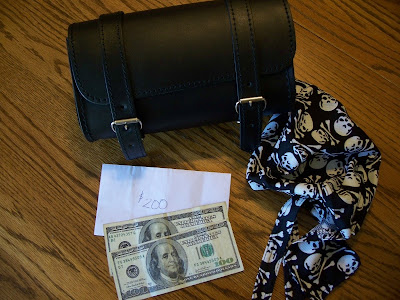 We zoomed back home by 5pm and dashed into the shower...we were pretty rank after spending all day in the heat and drinking beer and wearing ten layers of sunscreen! I don't remember ever showering so fast before but we were pressed for time! Our beloved Talons were playing our hated-arch-rivals the Yard Dawgz in less than two hours! But we made it in time. The Talons won easily and we had a good time. So far, this season, we've only lost one game. There are some pretty tough games coming up though.
***
******
***
Wow, what a day. Rick and I were both really tired on Sunday. So much excitement! Last night I told him I think we needed a weekend after our weekend, just to recover! In fact, I think I'm still tired! Good grief, I won $200! I still can't believe it! Do you know how much stash I could buy with $200??? Oh, yes. Whoops! of course you do!
***
******
***
We are going to Texas near the end of this week, for Rick's family reunion. If you don't see me around, chatting up your blogs, I'm just busy at the beach. I'll try to remember that darn camera too!
***
******
***
Thank you for visiting my blog today!
xox