Photo heavy post, sorry. Have you ever tried taking a photo of a biscornu? What a difficult task. They are so oddly shaped it's hard to capture them correctly and then they cast funny shadows.
Yay, a finish! I completed the stitching and beading on Wisteria Biscornu on Thursday. Washed, ironed on interfacing and stitched it together on Friday. Pawing through my meager button collection revealed I was sorely lacking suitable buttons so Saturday I went stash shopping and found the perfect buttons. Today I sewed on the buttons. 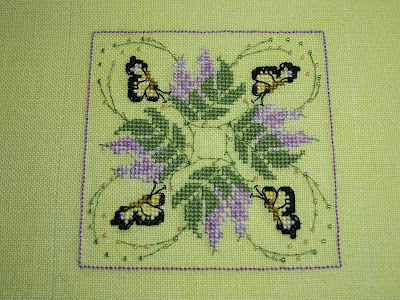 The yellow side with butterflies, before stitching both sides together. 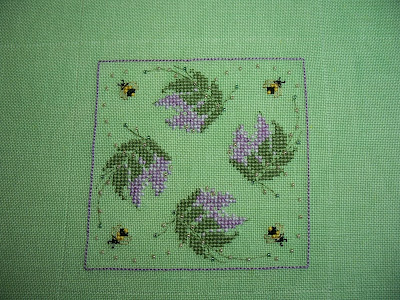 The green side with bees. 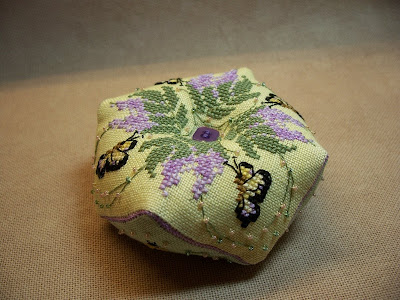 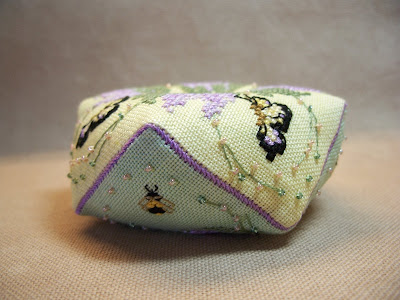 I like the soft colors in this photo. Yellow on top. 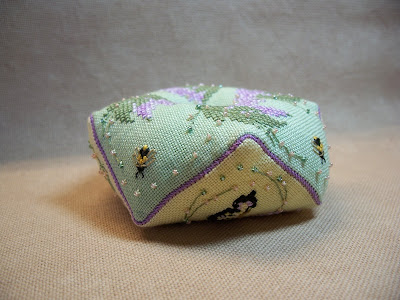 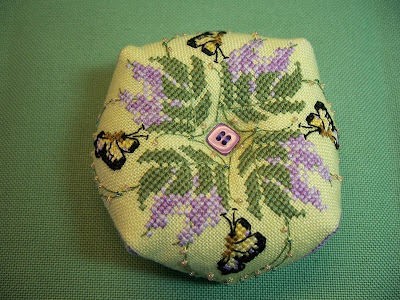 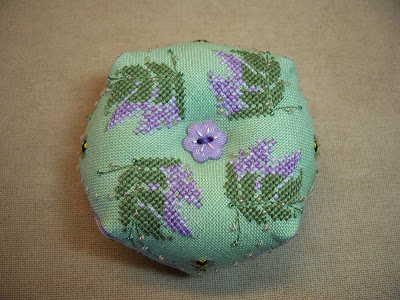 A larger, flower shaped lavender one for the bee side. 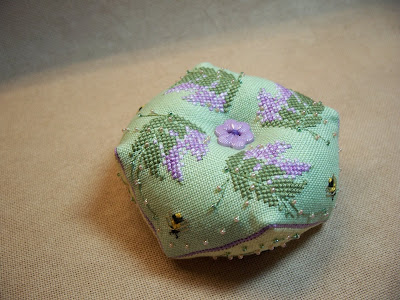 Wisteria Biscornu
Olenka's Stitches
32 count Belfast linen hand dyed by me
DMC and Mill Hill beads as charted
*****
The design can be purchased from Olga at Olenka's Stitches.
*****
Thank you so much, Olga, for such a wonderful design. I truly enjoyed every minute of stitching this biscornu!
*****
Thank you for visiting my blog today!
xox
*****
Edited to add an answer to a question in the comments: From what I understand "biscornu" is a French word meaning quirky or irregular. It was adopted by stitchers as a name for this funny shaped pincushion. These are also called tuffets.

After finishing up Crabby Weeds I decided to continue with my Wisteria Biscornu from Olga's blog. I had finished the front side waaay back in May and started the second side when we were in Texas in June. Then came obligation stitching that filled up the rest of June & July and now I can finally get back to this. I really like the bees on this side. I still need to backstitch the edge seam on the first side...I find that incredibly tedious so it gets done last! 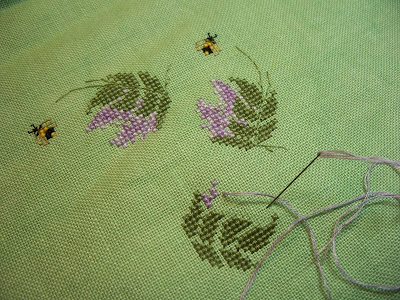 Fruitasses?
Tell me, who got Fruitasses??? Fess up, now! Sandra had me rolling in tears of laughter with her recent post...OMG what a great laugh!
Thank you for visiting my blog today!
xox
Meowed by Daffycat at 8/19/2009 06:55:00 PM 29 amicable purrs (click to leave a comment)

I had a great weekend. On Saturday, I finished up the August block of Crabby All Year...Weeds! I really love the tiny dandelion seeds ~ too cute! I'm thinking the brownish-green weeds might be crabgrass? What do you think?! This was a quick stitch, as most of the blocks are, and very enjoyable to work on. I think I'm ready for summer to be over. The hot weather should give way to autumn soon. I'm looking forward to stews and chili and a big pot of beans, ham and cornbread, oooo ~ chicken & dumplings...yum. Cooking heats up the house so much we just don't do much of it in the summer. We grill outside, eat cold sandwiches or get take-out. I want roasted turkey, baked ham and can you tell I'm tired of eating out? 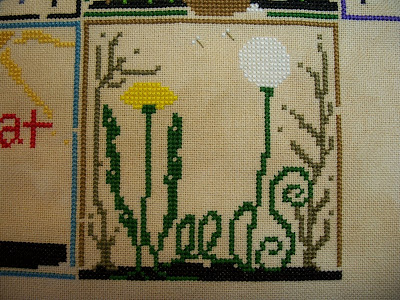 Her bags are packed...

That's right, Ms. Sisterhood is traveling tomorrow! There were 94 comments on the giveaway post. Not all of them were entries but that's a lot of comments! I usually print them out and cut them up to draw a name; more fun and involvement for me but that was 16 (OMG) pages of comments! I decided to do the random number generator and draw again if it chose someone that wasn't entering. 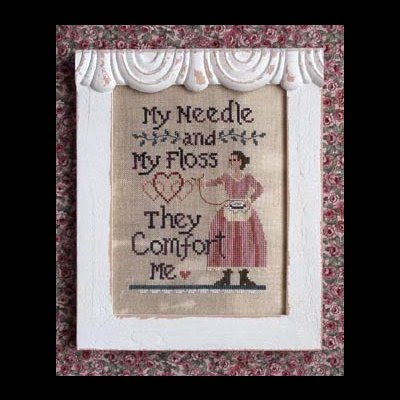 The random generator chose lucky #9! Congratulations Jill, of Purple Peacock...you are the newest member of the Sisterhood! I already have your address so I'll get her in the mail to you tomorrow! Thank you to everyone that entered!
Thank you for visiting my blog today!
xox
Meowed by Daffycat at 8/16/2009 10:10:00 AM 17 amicable purrs (click to leave a comment)

Labels: Sisterhood of the Traveling Pattern

I can't believe how well I've kept up on this project. I've been soooo good. There hasn't been a single month that I've started early or finished late...it's been right on schedule. I've even done other stitching in-between-times and I haven't gotten bored or lazy! A lot of this has to do with blogging about it, I think. You all are such great cheerleaders! Thanks! 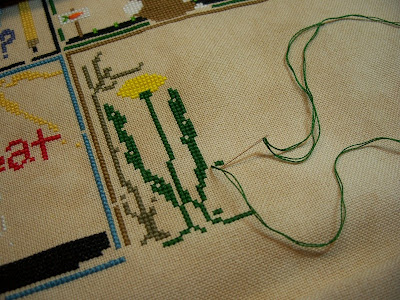 Sisterhood of the Traveling Pattern

The sign-ups are now closed and the winner will be announced 08/16!
Look what I finished last night! Yes...finally Ms. Sisterhood is ready to travel! I feel like I've kept her forever and wish I had been able to get her finished quicker but she is now ready for the next lucky stitcher. Would everybody please, let people know by posting about it on your blog? 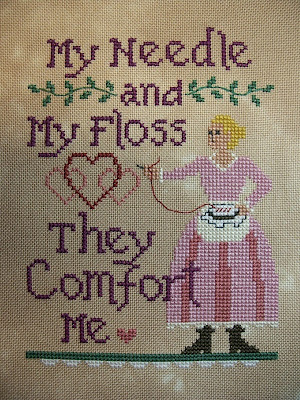 I have gotten many compliments on the fabric, which I tea-dyed. Perhaps I'll show you how I did it in another post. I used plain-old, everyday DMC as listed, except for Ms. Sisterhoods' hair and subbed 729 to make it blond. (I think it's a little too bright.) I was going to choose fancy overdyed cottons but when I pulled the DMC to match I found I really liked those colors! This was a truly comforting stitch and I was so thrilled to be a part of the Sisterhood!


This is the path she has taken on her journey:

(Note: If you’re not familiar with the story of this traveling pattern, Lizzy has recorded the history of it here.)
~~~~~

If you would like to be the next stitcher to join the Sisterhood please say so in a comment on this post only. I will draw a name in one week (next Saturday, the 15th.) Good luck!
The sign-ups are now closed and the winner will be announced 08/16!
Meowed by Daffycat at 8/08/2009 11:00:00 AM 94 amicable purrs (click to leave a comment)

Today, I received my Lizzie* Kate exchange from Michele of Just Another Stitching blog. I am really thrilled. Isn't this the best floss tag ever? I freakin' LOVE ladybugs and the colors in this tag are just gorgeous. Then, to top it off are the sweetest floss cards made from scrapbook papers. OMG! Thank you so much, Michele, I'm so pleased! 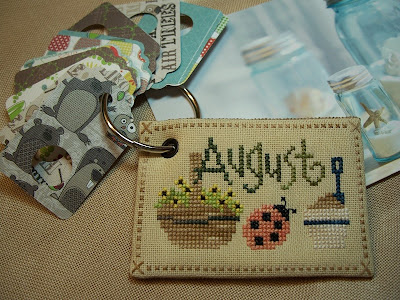 WIP
Here is a little update on the Traveling pattern. I'm not finding the time I thought I'd have the past couple of weeks and my mood is definitely off. Give me my stitchy time ~ or else! 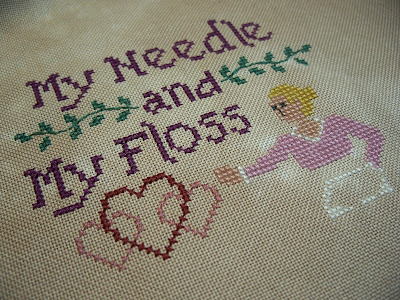 Just another shot of the WIP. I swear, I centered this; Gremlins came, when I wasn't looking, and moved all my stitching two inches to the left.
They had to have. 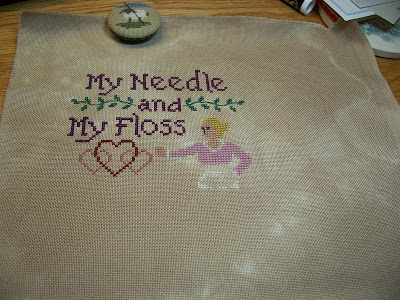