Lies! Lies! It's all lies! June does NOT zoom. It drags on forever. Tormenting a stitcher with it's large blocks of solid colors. Finally, the June Snapper Year block is complete. I'm so relieved. I was beginning to think I would never finish. 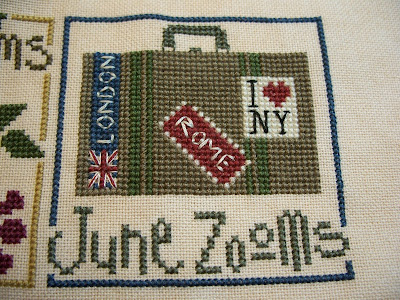 July is kitted up and a Netflix movie is in my queue. I still need to finish my ornament swap piece. The stitching is completed it just needs putting together, something that won't take long at all. I just have to sit down and do it.
Several of you asked how I am liking Pillars of the Earth. I am no movie critic! (Jessie teases me all the time how I forget the plot, storyline & details of movies almost instantly after finishing them. I'm terrible about remembering movies & books unless I see/read them over and over. This trait did not serve me well in school.) I usually watch movies of books I've read. I usually don't enjoy them as much as the book...there is never enough detail! Pillars was good. Or I should say is good ~ it's not finished yet. They've done an excellent job converting an enormous book into a mini-series. The book is much better! The only movie I've ever liked more than the book was Jurassic Park. There is just something about those dinosaurs!
In fact, I am so terrible about remembering inconsequential details that the other day I came home from the bookstore with the paperback sequel to Pillars ~ World Without End. I was very pleased to have a new book to read.

"In paperback! You already have it in hardcover!" She steamed.

*Sigh* There it was. In hardcover. On the bookshelf. I'm an idiot!

I've hardly read any blogs this week. I've been seduced away from the Internet by Netflix! In a word ~ awesome! I spent the time watching The Pillars of the Earth and finishing the stitching on my exchange...then a few threads were put into this damn suitcase. Not a lot of progress to show but the exchange will be finished soon, maybe this weekend and it doesn't have far to travel so I'll be able to post it next week. Maybe this suitcase will be done soon too? I'll catch up on my reader this weekend for sure. 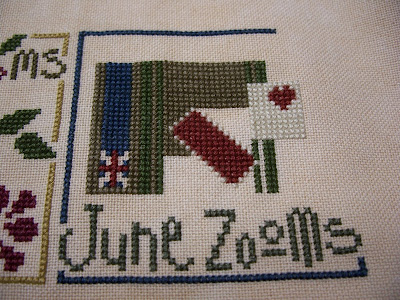 I know you didn't come here to see my puny stitching progress. You wanna see who won, right? I had a lot of entries for the Halloween pin pillow giveaway! Lots of you like Halloween! I put the number of entries into the random generator and it spit out lucky # 13. However, Peggy Lee is # 13 and she asked not to be included, sooooo...the next number chosen was #1, Silverlotus of Reflections in the Pond. Woo ~ congratulations! I'll be in contact for your mailing address! And Peg? How do you manage to get drawn twice in a row???
.
Thank you for visiting my blog today!
xox
Meowed by Daffycat at 8/27/2010 03:00:00 PM 30 amicable purrs (click to leave a comment)

Who likes Halloween stitching? A Giveaway

Okay, so I dug out the sewing machine yesterday afternoon and got busy. It's still trial & error, this sewing business. Gives me fits usually. Wouldn't you know? I sewed up three sides before I realized I had forgotten to sew on Mr. Pumpkin's candy corn eyes. *sigh* It was a trick to get them sewed on after that! The pin pillow turned out alright though. What do you think? This is one of the designs I bought on the weekend getaway and refused to show you. When I was showing Rick my purchases he said, "You sure like that Halloween stuff, don't you?" Yes, I do! I love just about any Autumn design, Halloween or Thanksgiving or simply Fall. I love them all.
It's still too hot. I think I hate Summer. Stitching Halloween/Autumn designs comforts me somehow... Design ~ Spooks, Ghosts, & Goblins
Designer ~ Val's Stuff
Fabric ~ 32 count Lugana (Daffycat-dyed)
Fiber ~ DMC
Embellishments ~ JABC tiny candy corn buttons
Now for the good stuff! I'm giving this pin pillow away to one lucky reader. Leave a comment on this post and make sure your email is in your profile or in your comment. I will draw a winner on Thursday, August 26th, 2010. Good luck!
Entries for this giveaway are now closed and the winner will be announced soon!
Thank you for visiting my blog today!
xox
Meowed by Daffycat at 8/23/2010 04:58:00 PM 92 amicable purrs (click to leave a comment)

I was NOT cheating...

...by adding eleven days of ORTs to my Totally Useless SAL jar. The first half of August kinda slipped by me and I completely forgot about posting at the New Moon! This is the nice way of saying I am actually really ditzy and can't keep track of time! My ORT jar is pleasingly full though and I was able to stitch quite a bit in the last weeks. If I'm on track for the next New Moon the jar might seem a little scanty ~ with eleven missing ORT days! 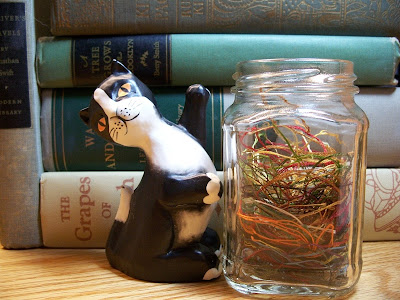 You can join us on the TU SAL just grab an empty jar, save those ORTs and snap a photo at the New Moon! There is a link in my sidebar but the originator of this project seems to have disappeared!
My over-one Christmas ornament is complete. I overlooked the fact that stitching this over-one would make my buttons way too large to fit. Now, I'm going to have to find some incredibly tiny buttons to make the holly berries. Here's hoping the needlework stores will carry miniature red buttons so I can finish this! Also, stitching over-one meant I had to make the center dividers all Smyrna crosses since the other specialty stitches wouldn't work. I love Smyrna's...so that's a good thing. 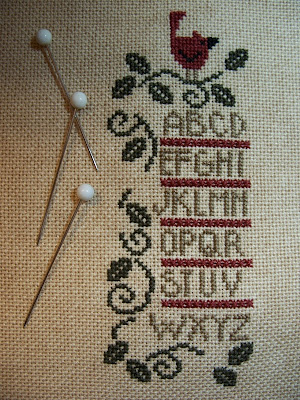 Design ~ Plum Berry Sampler, modified.
Designer ~ Bent Creek
Fabric ~ Tea Dyed 28 count Jobelan
Fiber ~ DMC
The focus now is my Ornament Swap project and that blasted June suitcase on Snapper Year. I also have another little stitch completed and needing finishing, if I will ever get up the guts to drag the sewing machine out and just do it!
Thank you for visiting my blog today!
xox
Meowed by Daffycat at 8/22/2010 09:46:00 AM 37 amicable purrs (click to leave a comment)

The first part of the weekend was so hot I just stayed indoors. On Saturday, I tea-dyed some fabrics and started a project that has been absolutely screaming at me. I was so into stitching this that I continued with it on Sunday, barely stopping to read blogs! I made sure I caught up with my reader, first! The weather was much improved by Sunday with some rain and very nice temperatures for August. 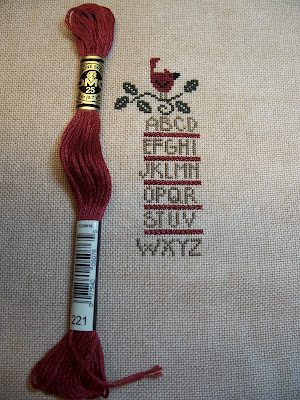 No, not déjà vu...I did stitch this recently for Conny in my Ornament Swap exchange. This time it's is for me. And it's over-one! I seldom stitch over-one but this fabric, 28 count Jobelan is excellent for it. It has given me no trouble at all! 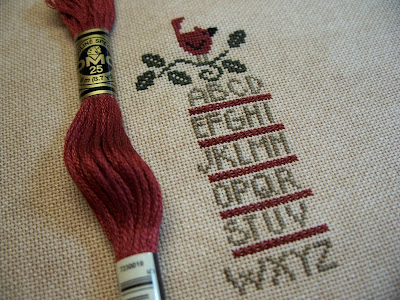 Can you believe how much I stitched in one weekend? I may have to give up my Queen of Slow Stitching crown now, huh? This is Bent Creek's Plum Berry Sampler, modified for Christmas. Already, it's calling to me to pick it up again.
My other current stitch is another Ornament for the next swap and I'm still plugging away at Snapper Year ~ sheesh, I'll never catch up to the current month on that darn thing. I am stuck on that damn suitcase. Dratted project.
Have you seen Blogger's new spam comments feature? Go to your Dashboard and listed under your blog will be a Comments folder. Spam comments should go there automatically! Hint...if you go to the Published Comments tab and scroll to the bottom...you can see how many total comments your blog has received! That's really cool. I like improvements.
Thank you for visiting my blog today!
xox
Meowed by Daffycat at 8/16/2010 04:01:00 PM 53 amicable purrs (click to leave a comment)

You see, I am a pack rat. That is all there is to it. I once saw a sign that says, "I'm creative...don't expect me to be neat too!" That's me to a T. Fortunately, I am also obsessive/compulsive. So, while I may gather clutter, eventually my OCD will kick in and I will have a "neatness fest" and get rid of the piles of junk! Um...I'm still waiting for it to kick in this time 'round...
Apparently, I won Wanda's blog drawing last month or June, was it? This pretty pin arrived sometime during that week my mom was in the hospital. It got lost in my junk. I'm so sorry for not acknowledging this Wanda! That was one crazy time for me. Isn't this an unusual creation? And so pretty! Thank you Wanda! 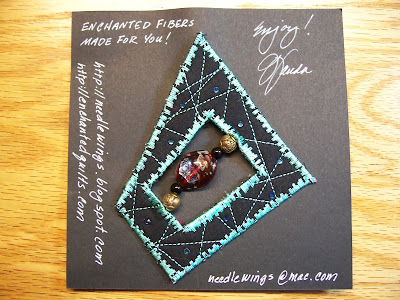 There are piles behind me on the floor. 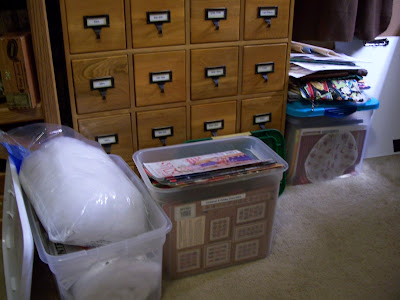 There are piles above those piles. 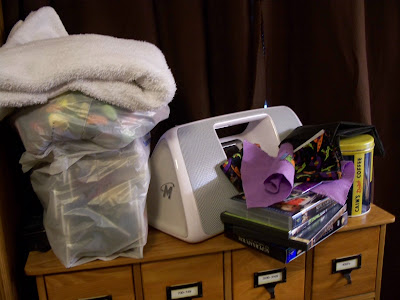 There are piles to the left of my laptop. 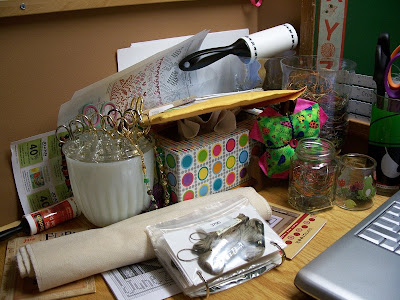 And there are piles to the right. 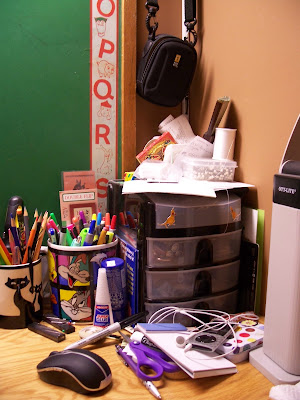 How can one be creative with all this clutter? It's amazing how fast this stuff grows...
.
My Autumn RAK has arrived in Canada at last! The little blackbird pin pillow went to dear Lynn of Kearnel's Korner. I'm so happy she liked what I made. It was great fun stitching for her! Now, we just wait for the next one to arrive!
.
Thank you for visiting my blog today!
xox
Meowed by Daffycat at 8/06/2010 03:20:00 PM 47 amicable purrs (click to leave a comment)

Labels: Giveaway, RAK, Where I stitch

Do you know what? I have discovered that if I stay off the computer I get more stitching done! Can you imagine? It's true...this little ladybug fob is actually my second finish this week but I'm not showing the other one until it is finished-finished as it's an RAK too. Yup, this ladybug fob & scissors is on it's way to someone who reads this blog.
Edit: This RAK went to Annette! 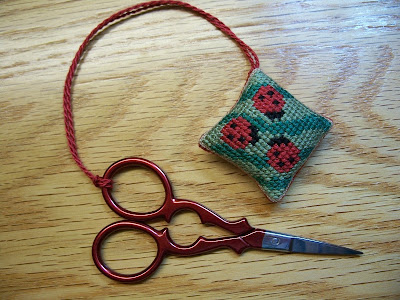 Design ~ June Flip-it (portion)
Designer ~ Lizzie*Kate
Fabric ~ 32 count tea-dyed Belfast
Fiber ~ DMC
Do you like seeing the RAKs before they are received? Or would you rather me wait to post? I kinda liked the idea of showing the photo of what's coming and then having it show up in surprise at someones house. My last RAK has still not been received but it had a ways to go so I'm not worried yet!
Thank you all for the well-wishes last weekend. We had a blast in Tulsa! We saw Inception (awesome movie) at the IMAX, went stash shopping, cheered the Talons at Arena Football (they lost,) and ate out a lot. I would have showed pictures but as this was our 25th anniversary it was kinda private. (There, that sounds much better than saying, "Sharon forgot the freakin' camera again and even if she had remembered to take it she would have forgotten to take photos anyway," doesn't it???) Yeah, I'm scatterbrained that way. We went to a "new to Tulsa" place called Baker's Street Pub...which I saw as we were coming out of Joann's. "Beer!" I gasped, "Let's get a beer!" It was pretty hot outside so the beer went down easy. The pub was fun, decorated up English style and I really, really liked their faux bookshelf doors to the bathrooms!
Sorry to disappoint but there can be no stash report. Everything I bought was for exchanges and RAKs! I did get loads of drool-worthy stuffs though, I promise!
Thank you for visiting my blog today!
xox
Meowed by Daffycat at 8/01/2010 06:18:00 PM 53 amicable purrs (click to leave a comment)