Sharon at One Life To Live tagged me for this. I tagged her with the 6 Random Things and she played along; so it's only fair...

The rules: Find the 6th folder in your photos folder and then the 6th photo in it.
* Pray that you remember the details *
Post it on your blog.
Tag 5 others, leave a comment to let them know they’ve been tagged. 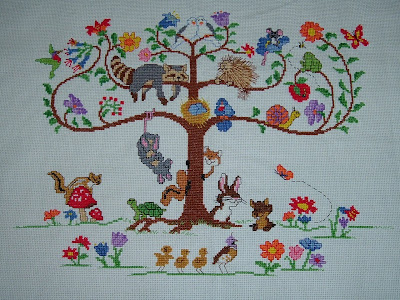 
At least this was a picture of something I can write about!

I stitched this a couple of years ago but I had the kit since I was first married. Probably since 1985 or 1986? OMG! When we were newly married we lived in Virginia, near Newport News. Rick was a Marine, stationed at the Naval base near there. Anyhoo, we would go to the mall but never could really buy anything as we were always broke! There was a needlework store in the mall and I used to look at this kit every time we went. I think it was like $12-a fortune to us. One day, Rick up and bought it for me! I was just a beginner stitcher and I did a quite a few stitches in the tree before becoming completely intimidated with the size of the project. It sat in my stash through many moves until a couple of years ago when Jessie spotted it's cuteness and begged me to stitch it. I rekitted it with DMC and stitched it on white 22 count aida.

The only thing I don't like is my little worm in the apple. He is supposed to be a bullion stitch but after many unsuccessful attempts I gave up. Defeated by a damn worm. Rats.

Oh WOW!! This is such a beautiful piece!!! Well done you! ..x. Thanks for sharing its' history too, makes it all the more special!
..x..

That piece is so cute! You don't see kits like that anymore with lots of cool stitches. I miss them.

And you've been tagged!

It's such a wonderful piece, thanks for sharing it's history :)

What a cute piece

This is such a fun piece!!! I'm sure it brought back a lot of memories~~

Cute piece of work,not sure i have a 6th folder LOL

That's a great piece! with a wonderful history! Now aren't you glad you finished it?!